Comments & Reviews to the Movie «Dig That, Zeebo Newton»

Word is getting around...

I met Muck at the American Film Market in Santa Monica last year. A really nice guy. "Dig That, Zeebo Newton" is on my to-see, so give it a look-see. Like myself, he's a Billy Bob Thornton fan, so you know he's got good taste!

Get the #1 #indie preorder #film on #ITunes today, and it watch it the day after tomorrow (Thursday). #DigThatZeeboNewton here...

Get the #1 Independent preordered movie on #iTunes...

Our long time friend has a movie that he directed, produced, & starred in called 'Dig That, Zeebo Newton' coming this Thursday (6/28) 🎥 Head over to iTunes now to preorder… 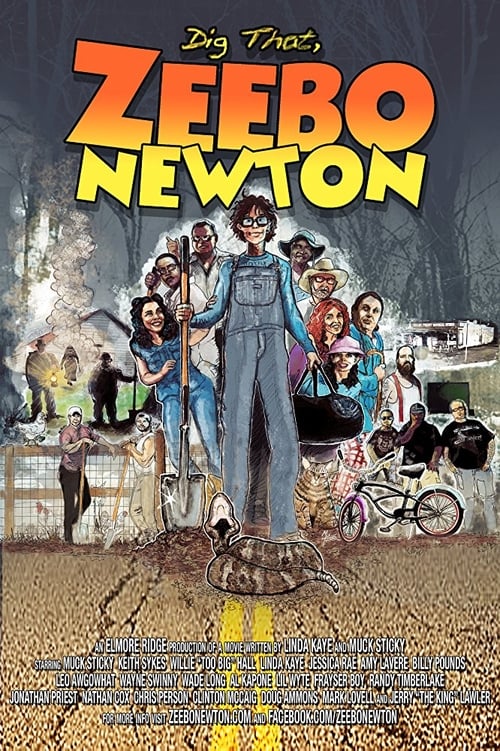 Very excited about our new movie #DigThatZeeboNewton being an official selection of the IndieFest Film Awards. Stay tuned...

The #Hammerheads are up to no good. Find out the harmful plans they have for Zeebo on June 28th. #DigThatZeeboNewton #Movie

The most anticipated #indiefilm of the year... #DigThatZeeboNewton Share with everyone you know...

This Friday The Heavyweight Chumps are joined for their 4/20 episode by the Jedi Master of Mary Jane himself, musician, filmmaker, actor and Cannibas Cup veteran @mucksticky Comment below with your questions about music or his new film #digthatzeebonewton

MORE EXCITING NEWS: We are happy to announce our movie #DigThatZeeboNewton has been officially selected and nominated as a semi-finalist in the Hollywood Screenings Film Festival, and YOU can VOTE up to 10 TIMES PER DAY between now and this Wednesday. Just make sure you enter "Dig That, Zeebo Newton" in the space provided here... http://www.hollywoodscreenings.org/online-voting.html This is our SIXTH official selection, and our THIRD nomination. We are truly thankful to everyone who supports what we do! Please vote 10 times today...

From LA to NYC, and now Miami!!! Our #movie #DigThatZeeboNewton has been selected by a fourth film festival!!! I can't help but hear Rose and Dorothy from the #GoldenGirls singing "Miami, Miami, you've got style!" Cannot express enough gratitude for those who have supported this project along the way, but THANK YOU SOOOOO MUCH! Let's take this all the way to the #Oscars! #indiefilm #film #filmmaking

I cannot begin to express how grateful I am to everyone who is part of this movie, and to everyone who packed out our two screenings last night. Truly an amazing experience! It was awesome to hear all of you laugh, see you cry, hear you boo the bad guys, and cheer for the heroes. If you came to the show, please leave a comment with your review of the movie on the Facebook.com/ZeeboNewton page. Thanks a bazillion! Much love! #IndieFilm #DigThatZeeboNewton

We are truly honored to have won our third award for our new movie #DigThatZeeboNewton. And we are truly thankful to everyone who is supporting this #indiefilm, including the #accoladeglobalfilmcompetition. The journey continues...

EXCITING ANNOUNCEMENT!!! Our film #DigThatZeeboNewton has WON an Indie Fest Film Award!! This is our first award, and we are THRILLED! MAJOR THANKS to everyone for supporting this movie, and to the #IndieFestFilmAwards for such an honor! The IndieFEST Film Awards recognizes film, television, videography and new media professionals who demonstrate exceptional achievement in craft and creativity, and those who produce standout entertainment or contribute to profound social change. In winning an IndieFEST Film Award, 'Dig That, Zeebo Newton' joins the ranks of other high-profile winners of this internationally respected award including Liam Neeson as the narrator of Love Thy Nature, A Path Appears Documentary featuring George Clooney and Blake Lively, Radical Grace executive produced by Susan Sarandon, a searing expose Davids and Goliath by Leon Lee, and Touched with Fire starring Katie Holmes. Rick Prickett, who chairs The IndieFEST Film Awards, had this to say about the latest winners, “The IndieFEST is not an easy award to win. Entries are received from around the world from powerhouse companies to remarkable new talent. The IndieFEST helps set the standard for craft and creativity. The judges were pleased with the exceptional high quality of entries. The goal of The IndieFEST Film Awards is to help winners achieve the recognition they deserve.” #IndieFilm #filmmaker #film #filmmaking #indie

The Hammerheads are cooking dinner with Leroy's New Improved Southern Surprise Road Weary Potted Possum Sauce. Would you try it? Tag a friend who would. #DigThatZeeboNewton

Our long time friend @mucksticky has a movie that he directed, produced, & starred in called 'Dig That, Zeebo Newton' coming this Thursday (6/28) ? Head over to iTunes now to preorder your copy, and a big congrats on your release brother! ??? #mucksticky #newrelease #newmovie #digthatzeebonewton

This one of THE MOST monumental moments of my career. I just picked up the very first DVD copies of our new movie #DigThatZeeboNewton. They start shipping out tomorrow. Endless thanks and gratitude to everyone who has been a part of this project in any way. This could not have happened without each and every single one of you! Much love!! Here we go...

More exciting movie news! Our film #DigThatZeeboNewton has been selected to be part of the 'Artist Circle' in the NOVA Film Festival. Many thanks to the festival and everyone supporting this movie.

We are thrilled to announce that our movie #DigThatZeeboNewton has won its fourth award! Endless thanks to everyone involved with this amazing project. We are truly blessed to have come this far, and we are excited about the future of our #indiefilm. We are working diligently to secure distribution, and hope to give y'all a release date very soon. #indie #film #movies #awards #internationalindependentfilmawards #blessed

This is what editing a 90-minute #movie looks like. #DigThatZeeboNewton #indiefilm #MuckSticky #editing #adobepremiere #film

My bro Ricky and I had a great time taking our movie #DigThatZeeboNewton to #AFM2017 in Santa Monica this past weekend. Met a ton of amazing people, and had a bunch of really wild experiences. Stay tuned for more info about the release date...

Had a great time hanging with my friend Jerry "The King" Lawler @realjerrylawler today at his restaurant @jerrylawlerbbq, and being a guest on his #DinnerWithTheKing podcast. Excited for everyone to see his role as Sheriff Dickson in our upcoming movie #DigThatZeeboNewton.

@mucksticky #DigThatZeeboNewton celebratory 5 course dinner last night was amazing!!! So proud of my brother muck and happy I could be a part of the movie. Number independent movie in the country!! ???? Premier in Memphis tomorrow night!!!

Watching #DigThatZeeboNewton on a big screen for the first time...

The Quirkiest Movie Of The Year

Opening Sequence from the movie 'Dig That, Zeebo Newton'